Running with the Bulls

Happy Halloween, I suppose. I was debating running with my costume tonight, but had some technical difficulties that have made me reconsider. Instead, I’ll run my normal city route and then bum around my apartment hoping no one rings the doorbell (chances are slim since we live in a building with a locking front door). In other news, I’m a bit of a curmudgeon. But I swear I’ll make up for it on Saturday.

Anyways, this past weekend I drove over to San Ramon to run the Brazen Half Marathon Championships in Las Trampas wilderness. I was alerted to this race by my friend Sam, who finished 2nd last year, and when he mentioned the large prize purse ($1000 to the winner, $500 for 2nd, $250 for 3rd), I signed up immediately. The website says there’s about 3000ft of climbing, but when I got there everyone was saying closer to 4000ft. I figured if anything, that suited me more since most of my long runs have contained somewhere between 4000-6000ft of climbing. I warmed up with Caitlin and Magda, and saw Sergio running around as well. I knew he’d won last year but was hoping that the Aggies XC race that was going on that same morning would pull him away. Apparently the $3500 prize purse has a pretty strong tractor beam. The warmup went all right. I didn’t feel great, but not terrible, and we saw a lot of cow patties (signs of things to come). Caitlin filled me and Magda in a bit on the course, which proved to be very helpful since there’s a hill around miles 7-8 that is very steep and rather long and knowing that was coming helped a lot when I hit the bottom of it.

After the warmup, I drank the Osmo pre-race hydration secret potion and lined up at the start. They announced the course records and we were off. Immediately, Sergio, a guy with a Boulder Running Company singlet, and I were off the front. I’d overheard him saying he’d come from Colorado for the race, so I planned to keep an eye on him. The plan was to just stick with Sergio as long as I could, since I figured he knew the course and would be a bit better at measuring the effort. The first climb hit right after mile 1 and was about a mile long itself. I felt pretty fatigued on it and was admittedly a little worried about how the rest of the race would go. As we crested the top, there was a really steep downhill awaiting us. And a family of cows. 2 adults and 2 calfs (calves?). By this time, the Boulder guy had fallen back a bit and Sergio and I were running together. The cows reacted to us and started running down the hill in the same direction. They were much faster than I thought they would be and it was a little worrying passing them on a single-lane fire road, as there wasn’t a ton of room in which to maneuver. Thankfully, we got through there with relatively little issue and it turns out the photographer at the bottom got some great shots of us running with the bulls. 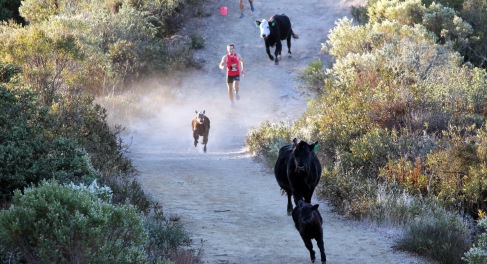 Some friends on the course

Once we were past the cows, we basically ran together until mile 6, when I slowed a bit to eat some gelatinous cubes. Sergio pushed and opened up a 40-50m gap which stayed pretty constant until mile 9. Throughout the race, we were fairly even going up the climbs, I would pull ahead a bit on the descents (finally they played to my advantage!) and then he would generally regain any lost ground on the flat sections. So we seesawed back and forth and finally around 9.5 miles in, I lost sight around a corner and then when I came around it, the gap had closed to 10m. I was surprised, but happy, as I had been trying to get back even with him for a while. We hit the final climb on the course, which was maybe a mile and a half long, but it was a pretty steep, steady grade. We just put our heads down and climbed and I was able to get some separation by the time we hit the top. It was downhill from there to the finish, with a couple of cruel rollers thrown in for good measure, and I just pushed as hard as I could. I crossed the line in 1:33:27, about 4 minutes faster than his previous course record, and he finished right around 1:35, also well under his old record.

I was pumped. I intended for this race to be a final hard tuneup before Bootlegger and I think it served that purpose perfectly. I came away with $1000, which is easily the biggest payday I’ve ever had at a race and I even got one of those enormous novelty checks! Magda and Caitlin finished 2nd and 3rd, respectively, behind Megan, who also set a new course record. BY 12 FREAKING MINUTES. Magda and Caitlin also went under the old course record and got some nice prize money and big checks as well. 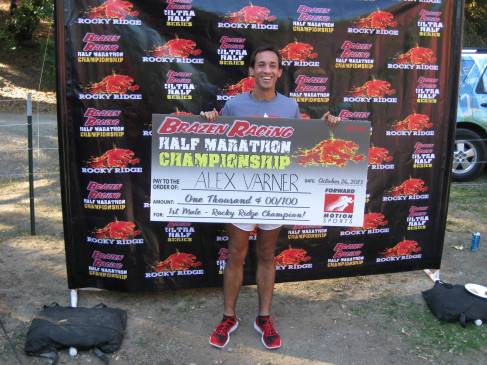 Can I deposit this at an ATM?

After cooling down and consuming Osmo recovery, they handed out the checks and I headed home. I had a great time running this race and am ready for Bootlegger. I was able to come back on Tuesday night and run some fast mile repeats, which is probably the last really hard workout I’ll do between now and Nov. 9.

I think it’s hard to really convey how well this race was put on. The director and volunteers did a fantastic job. I don’t know how the aid stations got to their remote locations on the course, but they were out there and were essential to my race plan. And to be able to put together such a big prize purse is also phenomenal. $3500 for this race alone and another $3500 for the series winners is a lot of money to come up with, and frankly, it speaks to how hard it is to find trail races with any sort of prize at all. I know it’s not easy, but even a couple of hundred bucks can go a long way to bringing in good talent and taking your race to the next level. But that’s enough of that. Tamalpa XC is on Saturday and then I’ll do some sort of taper workout on Tuesday and then it’s go time. I’m ready.

1 Response to Running with the Bulls