While I’d have liked to put up a year-in-review post today, I just haven’t had time to put one together so that will have to wait until 2015 is actually over. So for now, I’ll stick to TNF50 and the Club National Cross Country Championships.

TNF50 was the week after the Quad Dipsea. I took 2 days off immediately following the Quad and ran Tuesday through Friday, feeling better each day. I had the pleasure of running with Bryon Powell (of iRunFar) one day and with Chris Neilson (who was down with a couple other Nike designers) another. Friday felt pretty normal and I went to bed optimistic that I’d be able to give it a solid attempt on Saturday. Nike teammate Amanda Basham was staying with me for the weekend and we were up bright and early (3am) for a 3:30 departure to the start line.

The atmosphere at the start of this race is absolutely electric. Everyone is pumped for the final big event of the year and there are lots of guys and girls gunning for the win. This was my 2nd year running the race and just like last, it went out hot. I found myself a fair ways back from the leaders heading up the first climb up Bobcat. Getting towards the top, I made sure to look back down the trail and take in the sight of the hundreds of headlamps snaking their way up the valley. It’s a fun little bonus within a great event. I found myself chatting happily alongside Levi and Paddy. I use that as a gauge for effort early on in long races – if I can’t talk comfortably, I’m running too fast. There’s plenty of time for silence and suffering later on. The 2 cups of coffee I had probably didn’t help either, as I limit myself to 2-3 cups per week in an effort to keep its effects pronounced (and it works).

Before I knew it, we were heading back down Rodeo Valley Road and up Miwok. I pushed a little bit up Miwok, as I could see headlamps far ahead of me up the trail and didn’t want to lose too much time. Coming down Old Springs into Tennessee Valley was relatively uneventful and the climbs up Coastal and through Pirates Cove were much of the same, although I was continually noting how far ahead of me some of the headlamps seemed to be. Coming into Muir Beach, I felt some tightness in my knees. It was symmetrical so I wasn’t worried that it was an injury, but I knew it was most likely a result of my quads being still pretty wrecked from the Quad Dipsea (such a fitting name). It got uncomfortable enough to where I made the decision that if things didn’t get better in the next couple miles, I’d drop. I decided to push hard along Redwood Creek and up Heather Cutoff continuing up Coastal View to Cardiac and see if the change in pace might help my knees. I hoped it would and also figured that if I was going to make up some ground on the leaders, I had to start now. Running along Redwood Creek, I could see headlamps already several switchbacks up Heather Cutoff and knew that Zach Miller and Ryan Bak were taking it out hard, bringing several other guys with them. I passed several guys on the climb up Heather and Coastal View and my knees seemed to have calmed a bit. Coming through Cardiac, I left my headlamp at the aid station with Claire and continued on up Old Mine Trail. All of a sudden, I felt great. My knees weren’t hurting and I was moving well. I saw my coach, Jason Koop, as well as several friends (Devon, Topher, Kim, Sean, Yiou) which also helped my spirits.

After a long push up to Cardiac (Credit: iRunFar/Bryon Powell)

However, that was short-lived as basically as soon as I crossed Panoramic Highway and got onto Matt Davis (around mile 18), the trail got more technical and my knees decided they didn’t like all of the added movement that comes with picking every footstrike. I was bummed, but had prepared myself for the possibility that something like this might happen. As I made my way out Matt Davis, I became increasingly unhappy with the state of my knees. My pace slowed and I decided I was going to drop at Stinson Beach (mile 28 on the course). 8-9 more miles of running felt like a looooong time, though. I saw Rudy and Pam with before starting on the out-and-back section of the course and within a couple minutes, I realized I didn’t have to run the out-and-back if I was going to drop. I could just run straight down to Stinson. So I returned to them and continued on down to Stinson. On the way down, I thought about my DNF and found that I had no issues with it. My A race for the fall was the Quad Dipsea and I nailed it. Asking for more would just be getting greedy. I wasn’t about to do damage to my knees and quads by running another 30 miles on them in pain. Easy decision. I found the Nike crew at Stinson, as well as many friends, watched the top men and women come through, and eventually found my way back to the finish line to watch Zach, DBo, Ryan, and Jorge take first, second, third, and fourth. Nike won the team competition with Zach, Ryan, and Dan Kraft (7th) and Ryan Ghelfi (10th) rounded out our squad. Strava data here: TNF50

The rest of the afternoon was spent at the finish line rehashing our experiences and then we went back to Mill Valley, cleaned up, and hit the Deuce. Hard.

The following Saturday (after a week of easy runs where I actually felt some hop in my step), we were back in Golden Gate Park for the 2015 USATF Club Cross Country National Championships. This was my 5th weekend of racing in a row and I was ready for a break, but this race is one of the most fun events of the year. (On a related note, Ezra ran the Berkeley Half, Quad Dipsea, TNF50, and Club Nationals 4 weeks in a row, becoming the only guy to finish the Dirty Quad). Having it in our backyard just added to the excitement, and an added bonus was several good friends on San Francsico Running Company racing team (in its 1st year) would be running alongside West Valley Track Club (my team). A little friendly competition (followed by a lot of beer) is just what everyone needs to close out the year. 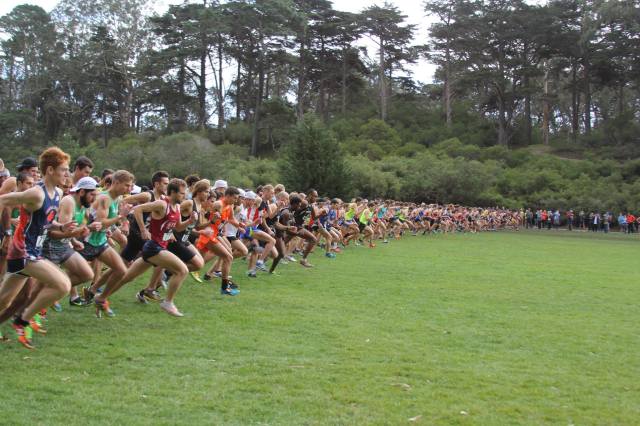 Jorge stalking me in the 2nd mile (Credit: Brett Rivers)

The race went pretty badly. I went out hard (planned) and felt pretty strong for the first 2 miles, but soon thereafter got a big side stitch which prevented me from getting full breaths and really opening up. I was bummed, but it’s a small price to pay for such a good fall of training and racing. Thankfully I wasn’t peaking for this race, so I just relegated myself to gritting my teeth and getting to the finish. I tried to keep Jorge in sight, but he gapped me (a great race, especially just a week after TNF50) and went on ahead. I suffered pretty badly in the final miles but managed to run roughly the same pace I had 3 weeks prior before the big races, so I couldn’t be too disappointed (even if it was on ugly positive splits). Strava data here: Club XC Nationals 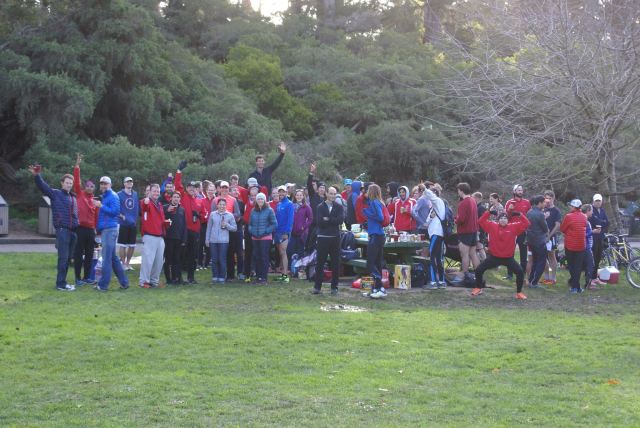 WVTC and SFRC hanging out post-race. Thanks to Headlands Brewing for providing the keg! (Credit: Bruce Davie)

Like the week before, the rest of the afternoon was spent hanging out in the park, rehashing our race, and then cleaning up before heading to the Strava after party. I can’t forget to mention our West Valley masters men’s team, which finished 2nd in the country! Huge congrats to them. It was another great year of cross country with West Valley and having the SFRC guys out there with us was most excellent. We’re already looking forward to next year.