Way Too Cool 50k was almost exactly what I needed it to be. Coming off the hip/quad issue that plagued me for several weeks, I was feeling very close to 100% physically heading into the race. I was able to get in some solid back-to-back longer runs the weekend before the race, and even though I had virtually no race fitness to speak of, I was excited to cover the distance and see what I had.

The race field was pretty loaded, with a bunch of fellow SFRC bros as well as Nike Trail Elite teammate David Roche, Chris Mocko, Brett Hornig, and a couple of Inside Trail guys. My goal was to go out fairly conservatively on the first 8 mile loop, get down to the river in one piece, and then make a move along the couple miles of rolling fire road before we started climbing in earnest again. As soon as the gun went off, David took off and was off the front by 15-20 seconds by the time we hit the trails. I was in a group with DBo, Jorge, Levi, Paddy, DeNucci, Mocko, Brett, and the ITR dudes. I executed pretty well, staying at near tail end of the lead group through the first 10-11 miles. Once we hit the river, though, I made a big push and within a mile or so had moved from 9th or 10th into 4th behind David, Jorge, and DBo. I could occasionally see DBo around a few corners but never got closer than 30 seconds or so, and Paddy remained about the same distance behind me, from what I could tell.

I felt pretty strong through 15-16 miles but could feel my lack of fitness on the initial climb out of the river and knew that it was just a matter of time before I’d simply run out of legs. That really became evident around mile 20 (2h12m), when I didn’t feel bad, I just felt tired. My legs had no more oomph and I knew I’d just be running it in as best I could. Paddy bridged up to me after a while and I trailed him up Goat Hill (mile 26) before losing sight of him for good. 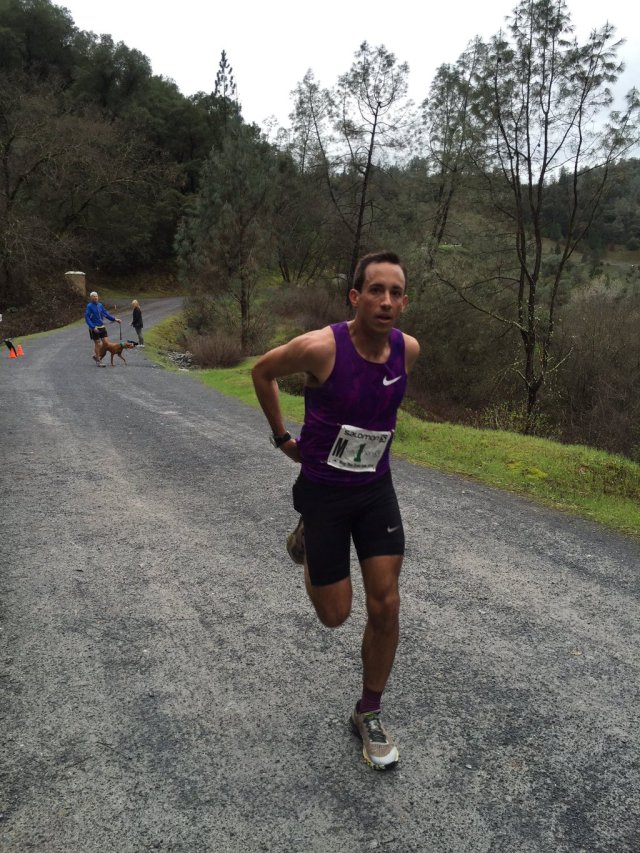 Just before making a move along the river (PC: ASGarbageCan)

I was pleased to find that my legs, while not moving terribly quickly, didn’t feel too bad. No major cramping or pains anywhere. I saw some familiar faces in the last couple miles (Luke, Chris, Eric are the ones I processed) and was quite happy when I crested the final climb and made my way into the finish. Thankfully there was no one bearing down on me, as the last turn was a total mud pit, which apparently claimed David Roche as a victim. I crossed the line in 3:29:09, about a minute faster than my kind-of-arbitrary 3:30:00 goal that I’d set a few weeks before. 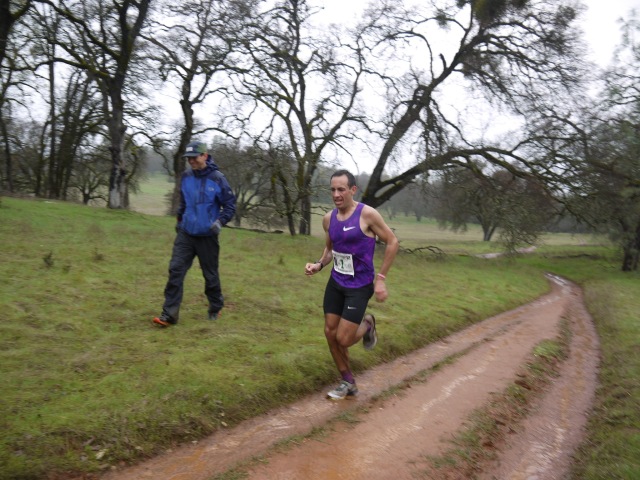 Considering the conditions, I’m quite pleased with the time and even more so with my legs. My hip/quad felt solid the whole day and I didn’t feel as though I’d gone deep in the well at any point.

A few random notes from the day, in no particular order:

– Levi – way to find your way out of the pain cave. Remember this race.

– David, Jorge, and DBo – congrats on strong races. And let’s not forget Paddy who reminds us each race that he’s just getting stronger.

– Schranz, Chris, and Luke – thanks for the cheering, smiles and pics!

Fuel: 2 PickyBars for breakfast, 2 during the first 1.5 hours of the race, 4 GU’s til the finish